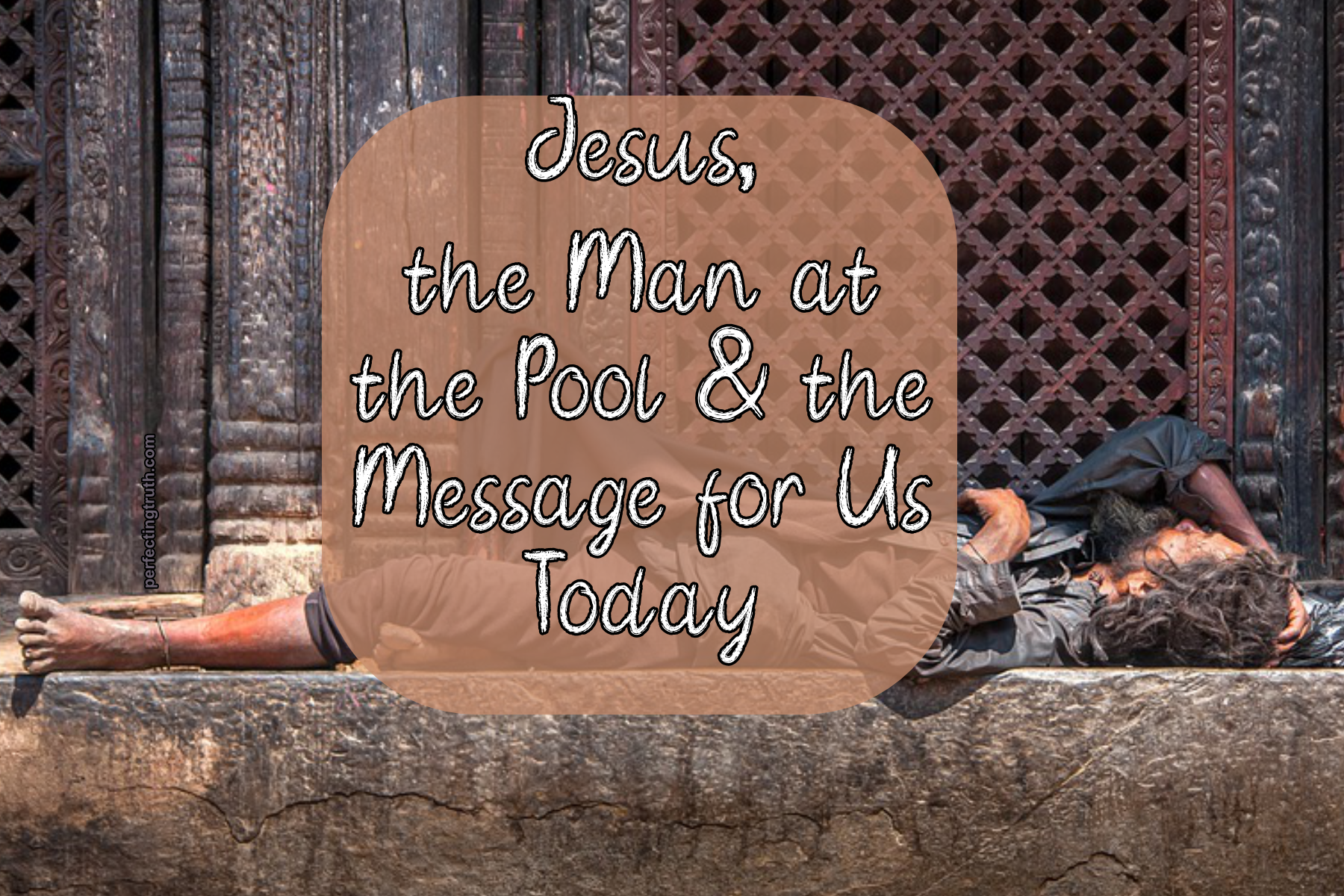 There are a number of accounts in Scripture that I could name on my favorites list. However, the account of the man at the pool of Bethesda is probably my most favorite encounter with Christ found in the Gospels. Have you ever sat and meditated on this particular narrative? If you haven’t, allow me to share a few thoughts about it with you.

One of the reasons this is my most favorite encounter with Christ is because I can so relate to this man; I know you can as well, along with countless others.

First of all, let’s think about this man by the pool. We do not know his name, but we are given a glimpse into his existence. This poor man was an invalid for 38 years. We know that he deeply desired to be healed. We have no idea how long he had been at the pool, hoping to one day be the first to enter it when the waters were stirred. Each and every time he missed the opportunity. He couldn’t enter the pool alone, he had no one to help him, and people would step over him, and I’m sure step on him in their efforts to enter before anybody else.

It is safe to say this man had been by the pool for a long time. Year after year he waited, holding on to hope that one day his time would come. Think about this man though, put yourself in his predicament.

Imagine how he felt, how ignored and deeply lonely he had to feel. He apparently had no family, no one cared about him. Seeing him there week after week, year after year, and no one cared enough to even try to help him into the water? Even the so-called people of God were against him! (They couldn’t have missed seeing him there, and they were not happy when he was delivered!)

Being an invalid, can you imagine the condition of his body and clothing? He was more than likely dirty, and reeked with serious body odor. If he had no one that would put him in the pool, then I highly doubt he had anyone to bathe him and dress him in clean clothes.

This poor soul had to feel invisible, insignificant, uncared for…unwanted. But one day someone came to the pool who saw him! That someone not only saw him, but they instantly cared about him!

JESUS saw this man by the pool. Out of all the people there, Jesus saw this completely overlooked fellow.

Jesus, with compassion, went to this man and asked him, “do you want to be healed?”

Now I know some church folks would scold the man. Tell him to “call those things that be not as though they were,” blame him for his condition, call him stupid etc… But Jesus did not do that.

After being there so long I am sure that man fought doubt and hopelessness every moment of the day. He fought the whispers of the enemy telling him healing would never come and God has forsaken him etc. But he held on to hope that one day he would be healed.

Jesus healed him. But the man had to believe him enough to act on what he was given to do. It is the same with each of us!

I am sure that man had a battle raging in his mind and a choice to make.

So the question facing us today is the same as the one the Lord asked this man. Do you want to be well?

What infirmities do we deal with today? It doesn’t necessarily have to be physical; we may have the activities of our limbs, as the old saints used to say. Maybe our infirmity is mental or emotional in nature. Maybe we have been crippled by wounds of the past etc…

Do you want to be well?

I know what it is like to feel invisible, unwanted etc… I know the fight of trying to live in spite of the crippling effect of past wounds. I can definitely connect with this man at the pool. Can you?

This account is important and encouraging for us today. Jesus is here. He sees us and he is saying, “Do you want to be healed?” “Get up, take up your mat and walk.”

That Word tells us that IMMEDIATELY the man was made whole, picked up his bed and walked. He didn’t give Jesus the 3rd degree or try to understand how he could walk after 38 stationary years. No, he obeyed!

We can say we believe God, but we have to believe Him to the point of obedience. In our obedience comes our deliverance. Sometimes we may be presented with something to do in order to receive what we have been desiring and waiting for so long.

Like the man at the Bethesda pool had to do what Christ said, the blind man had to obey and wash in the pool of Siloam (John 9:1-7); if they had refused to obey Christ then they would have forfeited their healing. What healing are we forfeiting by not believing and obeying the Lord?

Let us be like the man at the pool of Bethesda. Let us accept the healing Christ is offering us. Let us believe Him and move in swift obedience. Let us do whatever the Lord gives us to do for our mental, emotional and physical healing.

Let us be encouraged, knowing that the same compassion Christ had for that disabled man He also has towards us. Cast down the whispers and discouragement of the enemy and step in obedience to whatever instruction the Lord has given. Be like the man by the pool, get up and walk!

Be encouraged and never doubt God.

2 thoughts on “Jesus, the Man at the Pool and the Message for Us Today”