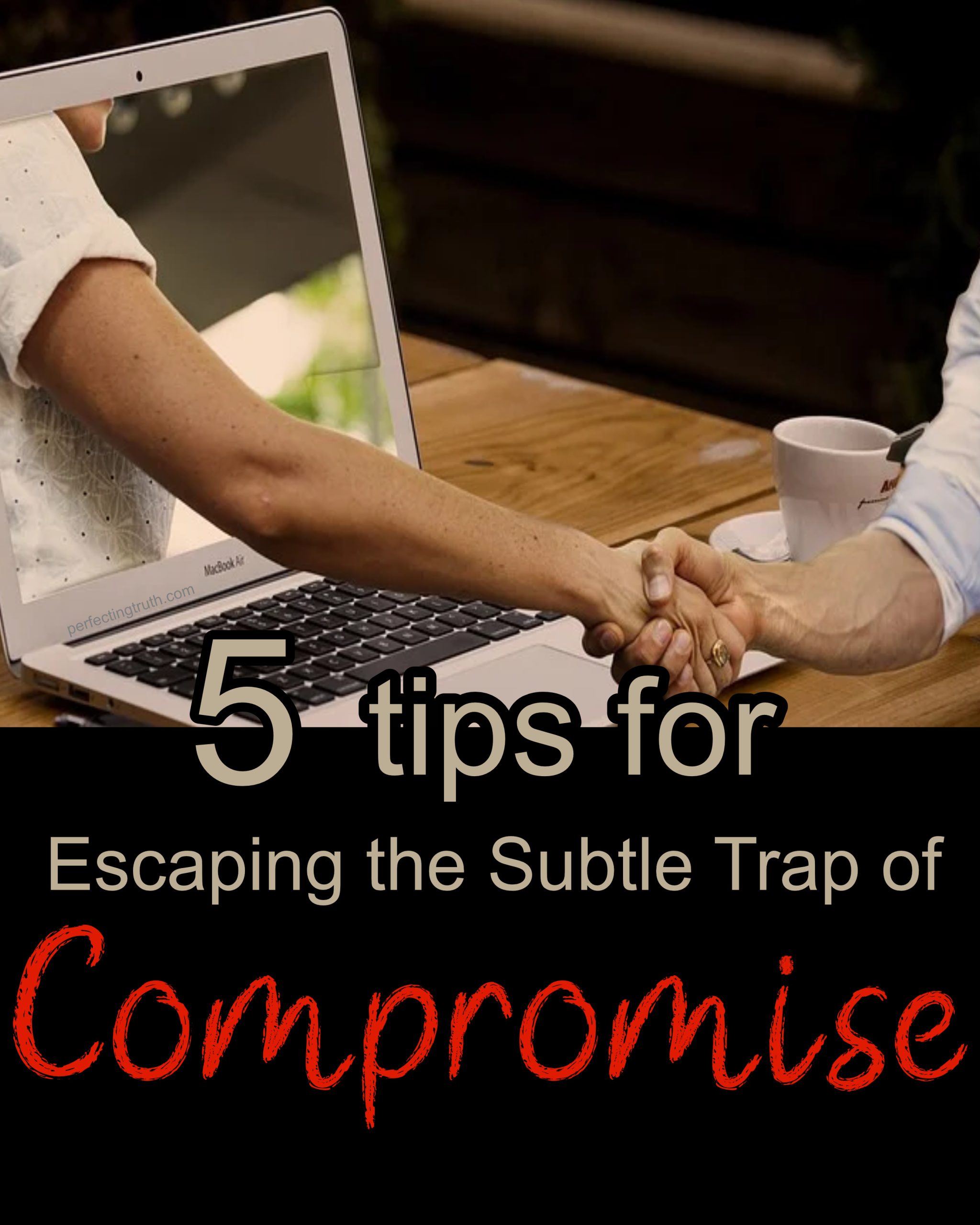 Today I want us to talk about the important subject of compromise. There was a show that I would have said was very good a few days ago. The acting is really good, casting is great, and it is based on the Gospels. What more could you ask for, right? I really liked this show and told others about it. There were some moments that gave me pause, but I tried to give them the benefit of the doubt, not wanting to be a harsh critic right out of the gate. But, as I started to watch this again from the 1st episode with my sister, these same points could not be ignored. The more I pulled at the thread of questions, the more things unraveled, and the more disappointed I became.

One scene, a very telling marker for the problem, is one in which they removed “repentance” from Luke 5:32, when Jesus answered the Pharisees. Now, there was No Reason to remove that word; it was done on purpose. To remove that word leaves the reason for Jesus’ calling of sinners wide open. I am sorry, but the Lord did not come here with a blank purpose statement for us to fill in as we see fit! So, when you start to look at other issues of this “show” in light of this major blunder, more questions arise. If writers are bold enough to erase Christ’s purpose, expunge His words, while claiming a desire to get the Gospel message out around the world…hmmmm, that’s a big problem.

This also brings in another problem; the very real question of sacrilege and blasphemy. Because the Word of God is sacred (whether most today treat it as such is irrelevant; the Bible is still sacred), then to butcher it to appease the sinful masses or to be ecumenically inclusive is to misuse what is sacred.

So, as true believing followers of Christ, can we watch such a program? Is it not compromise with the world, the flesh and the devil to continue to praise and support such a thing that diminishes the respect and seriousness due the words and purpose of Jesus Christ?

This entire situation with a clean, wholesome television show reveals how much the church compromises the high standards of God to suite themselves. The compromise is subtle, and can come in a way we do not immediately recognize. Go back and check church history, before the reformation, and you will see where compromises were made and the irreparable consequences it eventually had. One need not even look too closely to see some of the same compromises being revisited by protestants today!

I try to be careful of the hidden landmines of this world. But this just proves no one is exempt from the pit of compromise. As much as I hate to admit it, I stepped right in the trap of compromise because I liked the concept, and admired the work being done and effort made to do a good thing without the input of “hellywood.” For a while I was willing to keep giving patience and benefits of doubt. I didn’t realize at the time that I was stepping right into the pit of compromise.

What other areas do we slip into compromise without realizing it? Maybe it’s the things we say, the help we can but won’t provide. Maybe it’s in movies, books or other television shows. Are we accepting of a little profanity because “that’s just how people talk today?”  Do we excuse away the inappropriate portrayals on the small or silver screen because, “I’m an adult,” or the fact that you are married? Have you let some church leader convince you that such things are okay if you can “handle it?”

That, my dear, is compromise!

Do we wear inappropriate things and, refusing to be honest, choose to use the world’s explanations to “make it okay”? Compromise!

Maybe we laugh at inappropriate things on the job because we don’t want to offend others or have them think ill of us; we want to fit it. Compromise!

I have watched as church leaders tell congregations they cannot come to church if they haven’t gotten The Jab. Compromise!

Maybe our best friends are unbelievers and we spend the majority of our time with them, and not for the purpose of lifting Jesus up. Even though we know what the Bible says about this, we have a ready “but” waiting. When we do this, however, we are walking in blatant disobedience. Compromise!

In church circles we often see compromise in the refusal to obey Scripture and not invite in and/or give encouragement to any who does abide in the full doctrine of Christ. The Bible clearly says anyone who encourages such people becomes a partner in their evil (2 John 1:10-11). So often church folks refuse to hold to this and other passages when it comes to their relatives, for example. They choose instead to engage in long conversations with them and even bring them into their homes to live; darkness and light under the same roof. Compromise! (Rom 16:17-18; 2 Thess 3:14; 2 Tim 3:5-6)

Look at how many professing believers stumble and fall over the politics of this world, choosing sides with political parties and movements that are polar opposites to the standards of God and His Word. Compromise!

The examples go on and on because human beings like to make excuses, to find reasons to do what they want to do and still be right. It is that attitude that got humanity into this mess in the first place. Instead of just following God’s instruction, Adam and Even listened to the voice of another and did what they wanted to do. They tried to excuse it away, but it did not work. They compromised and lost.

We must get it through our heads that we cannot compromise with the world. No compromise will be accepted by God. It may be difficult to live by God’s standards and not cave to compromise, difficult to stop saying or doing what you like; however, once you realize the compromise then you must also realize that hell is even more eternally difficult than compliance with God’s Word will ever be!

So, in a world such as ours, how can we avoid the snares of compromise?

This journey from earth to glory is not an easy one, as many would have us think. We must remain on guard against the tricks, traps, and sneaky interjections of the enemy. We must remember where we are, and who the leader of this world is. Every waking moment our adversary is on the job. What of us? We must not let anything become so important that we are willing to compromise the Word and Will of God in order to have it. Such as with The Chosen. I liked the show, I really did, and I had high hopes for it; however, as a child of God I can’t give approval and support to tampering with the words and purpose of Jesus. How about you? Wherever it is found in our lives, let’s be determined to get rid of compromise.

Until next time everybody,